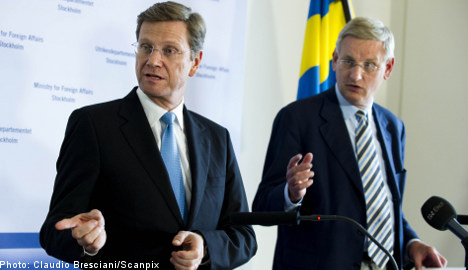 “The situation is alarming,” Bildt said at a joint press conference with Westerwelle in Stockholm on Monday.

Bildt emphasised the need for rapid action “in order to contribute to the confidence that is a necessity for people to start returning home.”

“If you don’t get people to start moving home fairly rapidly, you easily create a situation that sort of breeds resentment for years to come, and then there could be a very volatile and explosive situation,” he cautioned.

“We are very concerned,” Westerwelle said.

He joined Bildt in saying that Europe needed to act quickly to “protect our European citizens in the region (and) protect all the refugees, (to make sure) the borders are opened so that they have a chance to survive and to come into safer circumstances.”

Officials and aid agencies say the clashes between Kyrgyz and Uzbeks have killed up to 2,000 people and affected up to one million, including 300,000 people displaced in Kyrgyzstan and 100,000 who have fled to neighbouring Uzbekistan.

It was of the utmost importance, Westerwelle stressed, “to stabilise the whole situation in the region … I think the whole region has understood how explosive the situation could develop if we don’t act now.”

The Kyrgyz riots were the worst inter-ethnic clashes to hit the impoverished Central Asian state since the collapse of the Soviet Union.

Victims of the unrest have told AFP that the violence was a brutal and orchestrated campaign by armed militias of ethnic Kyrgyz targeting Uzbeks, who

make up 14 percent of Kyrgyzstan’s population of 5.3 million.

Kyrgyzstan’s interim leader Roza Otunbayeva has insisted the country would go ahead with a referendum Sunday on a new constitution, saying it was vital for stability.