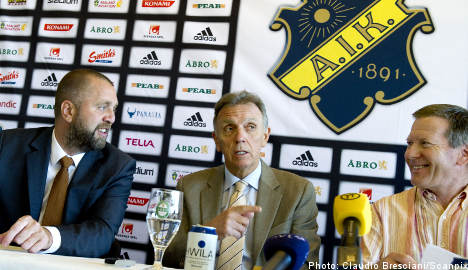 Since his playing days as a defender for the Rangers for 15 years, he has managed teams in in Scotland before becoming assistant manager at Coventry City.

Miller also spent nine years at Liverpool, first as director of scouting, then as first-team coach. Miller was last at JEF Chiba United in Japan before his contract was terminated in July.

“AIK is a great club with many dedicated fans. I also share AIK’s philosophy in playing football – not kicking the ball, and the strategy to be an ambitious club where players can develop,” said Miller. “I look forward to lifting the club further with Bjorn Wesström and the others in management.”

Wesström, who took over as head coach on April 26, will assist Miller, while Jens Andersson takes over as sports manager.

“I have chosen to stay down on the field and not return to the desk,” said Wesström. “Getting the chance to work with Miller will be an important experience for me and also be stimulating for AIK. That the club has a long-term plan for me makes me proud and highly motivated.”

In addition to the Rangers, Coventry City, Liverpool and JEF Chiba United, Miller has also coached at Greenock Morton, St. Mirren and Hibernian in Scotland. He will lead his first training session at 4pm on Tuesday.

“To have the opportunity to work with such a merited coach who also shares AIK’s strategy and values is a fantastic opportunity for AIK and the sports management of the club,” said Thomas Lyth, board chairman of AIK Fotboll.

He added, “Miller will be able to train and develop our coaches and managers and contribute to the squad and club’s development in a way that supports our long-term investment.”

AIK Fotboll will hold an information meeting for AIK Fotboll supporters and shareholders at Restaurant Råsunda (west grandstand) at 7pm on Tuesday.