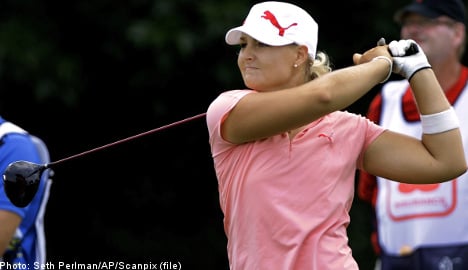 Nordqvist, 23, won the LPGA Championship title in just her fifth pro start last year, will now try to join the exclusive club of women who have won the title two years in a row.

“It’s hard to believe. Sometimes I have to pinch myself to actually

understand that it happened,” Nordqvist, said as prepared to launch her

Last year at Bulle Rock, Nordqvist fired a final-round 68 for a four-shot

victory over Australian Lindsey Wright. The Swede went on to cap her stellar LPGA Tour rookie campaign by winning the LPGA Tour Championship.

Championship titles. Nordqvist will face stiff competition in the second women’s major championship of the season.

Former world number one Lorena Ochoa has disappeared into retirement since the Kraft Nabisco Championship in March, but the two players who have held the number one spot since her departure are both here as all of the top 15 in the world rankings take part.

Heading the list is current world number one Ai Miyazato of Japan, who

seized the top spot with a victory at Atlantic City on Sunday. It was the 25-year-old’s fifth career win on the LPGA Tour but first on US soil. She won earlier this year in Thailand, Singapore and Mexico and won last year in France.

Also in the field is South Korean Jiyai Shin. Shin ascended to number one

on the same week that Ochoa retired, but she withdrew from her scheduled start a fortnight ago to undergo an emergency appendectomy. This will be her first tournament since the surgery.

The tournament has changed venues after sponsor McDonald’s pulled out.

Another longtime LPGA sponsor, Wegmans, stepped in, saving the tour the

embarrassment of losing one of its major championships.

Wegmans agreed to suspend its own established tournament for this season

New LPGA commissioner Mike Whan said the move has preserved the quality of the tournament.

on the right kind of fan base. All that exists in Rochester,” Whan said. “You

Wegmans just matches all those things.”

Record-setting galleries are expected at Locust Hill, which has never

hosted a major. The course has been tweaked for the occasion, with eight holes lengthened a total of 141 yards to take the course length to 6,506 yards. Nine fairways have been narrowed and the rough is thicker and deeper than has been encountered at previous LPGA Tour events here.

“It’s pretty impressive what they’ve done,” said pro Cristie Kerr. “I like the

way this course is shaping up. I think you’re going to see some special stuff