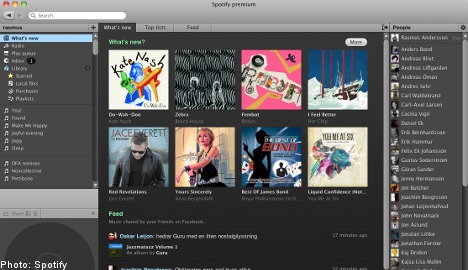 Swedish songwriters recently received a share of 4 million kronor ($512,280) of the total fees. However, how much each songwriter was given has remained a secret.

One year ago, STIM, the Swedish music songwriters’ association, paid its first fees for streaming via the digital music service. Since then, the number of Spotify users has increased exponentially.

Susanne Bodin, communications director of STIM, would only say, “This is an eightfold increase,” in reference to the size of the payment amount to Swedish songwriters.

According to previous information in STIM’s own publication, STIM-nytt, the amount of last year’s June payment related to Spotify was 500,000 kronor. This implies that this year’s payment for the first quarter would have amounted to around 4 million kronor.

However, STIM has declined to discuss the actual amount, nor will it break down the so-called value stream that was mentioned last year and attracted much attention: a song that was played in 2009 a million times gave rightholders 2,300 kronor to divide up amongst themselves.

The figure gave rise to intense debate in the music industry and Spotify was accused of paying too meagre compensation.

The major record labels, which also have stakes in Spotify, are starting to make serious money on the music service. Even STIM’s payments are expected to continue to grow over time.

“We hope and believe that Spotify will continue to grow and not only Spotify, it is important to say, but also other streaming services,” added Bodin. “We are fully confident that we will continue increasing the payments to our songwriters.”