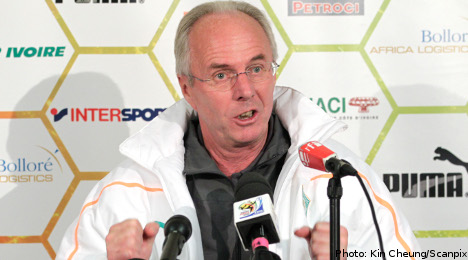 The 62-year-old Swede, who is in charge of the Ivory Coast at the World Cup finals, said he will find a television in Nelspruit and watch his former team take on their World Cup nemesis.

“I saw England’s match against Slovenia (the English won 1-0 to qualify for the second round) and I thought England played well,” he said.

“I think they can beat Germany, it will be a huge game. I am going to look at that on TV.”

Eriksson was in charge of two England World Cup campaigns in 2002 and 2006, but never succeeded in taking the side beyond the last eight, losing to eventual winners Brazil in 2002 and then to Portugal on penalties four years later.

Ivory Coast have slender hopes of making the last 16 as they must thrash North Korea later on Friday and hope that Brazil defeat Portugal convincingly if ‘The Elephants’ are to progress.

Germany goalkeeper Manuel Neuer meanwhile insists he will be ready to give England more World Cup heartache should Sunday’s clash is decided by a penalty shoot-out.

Germany have won all four of their penalty shoot-outs at World Cup finals and the 24-year-old Neuer says he has no intention of seeing that record broken should the game with England be decided by the dreaded spot-kicks.

“We hope it won’t get as far as that, but if it does, I will be ready,” said the Schalke 04 shotstopper.

“As a goalkeeper you can only win at a penalty shoot-out as nothing is really expected of you, I never approach shoot-outs in a negative manner.

“I will prepare for it of course, we have some good penalty takers, but so do they, we just have to play the memory game.”

Few England fans will need reminding of the heartbreak of Turin in the 1990 World Cup semi-final when Chris Waddle and Stuart Pearce both missed penalties as Germany won the shoot-out 4-3 on their way to winning the title.

Germany’s amazing run of penalty shoot-out success started at the 1982 World Cup in Spain when they beat France 5-4 on spot-kicks in the semi-final, before losing the final to Italy.

They then beat hosts Mexico 4-1 in a quarter-final shoot-out at the 1986 World Cup on their way to losing the final 3-2 to Argentina.

Jens Lehmann was the goalkeeping hero in 2006 as hosts Germany beat Argentina 4-2 when the quarter-final was decided by a penalty shoot-out.

Germany went on to finish third.

Neuer has recent experience of a convincing victory over the English when he was in the Germany team which hammered their old rivals 4-0 in last year’s European Under-21 Championships in Sweden.

Mesut Özil, one of Germany’s rising stars at this World Cup, was England’s chief tormentor that day scoring one of the goals, but Neuer says it will not be so easy in Bloemfontein this Sunday.

“We played them twice in that tournament, we drew 1-1 with them in the group game, so we already know it will not be easy,” said Neuer.

“Mesut Özil had a great day and he hit the target, but this will be a totally different match.”

The average age of the German team is just under 25 and their lack of experience showed in the group stages here as they bounced back from the shock 1-0 defeat to Serbia with a nervy win over Ghana on Wednesday.

Neuer says now the Germans have reached the knock out stages, they need to make sure they give it all they have against England.

“We failed to score in the first half (against Ghana), so the pressure increased after the break,” he said.

“Once we scored, the weight was off our shoulders, but now we need to put our foot on the pedal against England.”