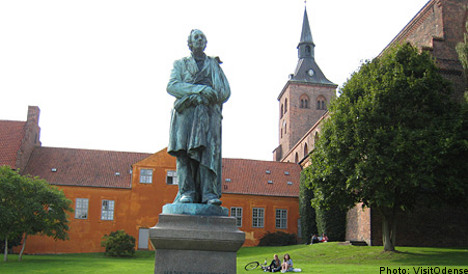 Odense lies roughly in the middle of the island of Funen, sandwiched between Zealand and the Jutland peninsula in Denmark.

However, this does not diminish the importance and contributions of Andersen to the city, Denmark's third-largest. Up until the beginning of the Danish industrial revolution, Odense was the second-largest city in the country before it was overtaken by Aarhus.

The name Odense derives from Odins Vé, meaning “Odin's shrine,” referring to the god Odin from Norse mythology. It is one of Denmark's oldest cities and celebrated its millennial in 1988. In honour of the occasion, a “1,000 Year Forest” (Tusindårsskoven) was cultivated.

Despite the Norse origins of the city's name, some of its oldest attractions have been revered by Christians for centuries.

The shrine of St. Canute (Sankt Knud/Knud den Hellige) in Saint Canute's Cathedral (Sankt Knuds Kirke) dating from 1081 to 1093 was a destination for pilgrims throughout the Middle Ages. Canute, the patron saint of Denmark, had planned to conquer England from William of Normandy and was slain in an insurrection in Odense in 1086.

Odense's most famous landmark was briefly Odinstårnet (Odin Tower). When it was built in 1935, it was the second-tallest in Europe behind the Eiffel Tower. Odinstårnet was blown up by a Danish Nazi group in 1944 and was never rebuilt. However, a miniature model now stands in Odinsparken near where the original tower stood.

For the literary-minded, Odense is truly a treat, with the numerous statues, parades and monuments that the city proudly hosts in honour of Andersen. Andersen was born in 1805 in a tiny house on Munkemøllestræde near the cathedral.

For those who love architecture, simply walking around the town is a pleasant way to spend a day in the city. Odense is filled with many buildings from the 15th and 16th centuries, especially in the Old Quarter.

Most of Odense's attractions, bars, restaurants and shopping areas are easily accessible on foot. All of the city's main hotels are in the city centre or near the train station. As a general rule all of the major attractions in the centre are between five to 10 minutes of each other.

The lone exception is Funen Village (Den Fynske Landsby), which is about a 45 minute walk along the river. The open-air museum features 25 buildings from Funish villages, most of which date back to the 18th and 19th centuries.

Along the way is also the Odense Zoo. Opened in 1930, the zoo is home to animals from around the world and in 2001, it opened the Oceanium, where visitors can marvel at its marine life exhibitions.

In addition to walking, there is also yacht access to Odense thanks to the construction of a 7 km-long canal from Odense Fjord to the old harbour.

For those with a fondness for trains, the Danish Railway Museum is home to dozens of old trains, carriages and railroad memorabilia. On public holidays and in the summer, the museum also arranges train rides in old vintage steam trains to various destinations on Funen.

Take the train to Odense

Starting on August 15th, SJ will begin daily X2000 express service to Odense alternating from both Stockholm and Gothenburg, arriving between 9pm to 11pm and leaving Odense for Sweden between 6am to 7am. Copenhagen is only 90 minutes to two hours away by train, with trains departing two to three times an hour.