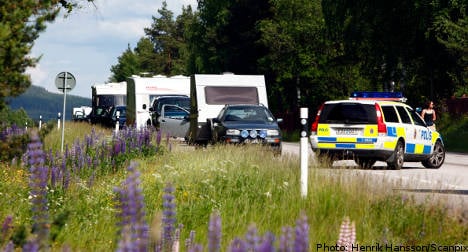 The Midsummer festivities are typically associated with heavy alcohol consumption and police forces across the country often have a busy weekend, with drink driving among the most common offences.

But this year deaths on the road amounted to five, down from an average of eight in recent years.

The worst reported accident was in Ystad in the far south of the country on Saturday evening.

“The car, which was a cabriolet, flipped over when it left the road and landed on its roof. The people in the car, a man and a woman, died immediately,” said Peter Martin at Skåne police.

The cause of the accident remains unclear and there is no suspicion of speeding.

In another incident in southern Sweden on Thursday an elderly man died when his car became stuck on the railway tracks in Västra Torup between Tyringe and Perstorp. The car was completely demolished by an oncoming regional train.

Skåne police have as yet been unable to establish how the vehicle became stuck inside the road barriers.

A further fatality occurred in a head-on collision on road 80 near Falun. The driver of the other car involved in the crash escaped with his life.

A further man died in a bicycle accident in Traryd in southern Sweden on Friday night. It is as yet unclear how he managed to fall off his bike.

Three women in their twenties were hurt, two seriously, when a old Volvo, packed with ten people, drove off the road near Brevens bruk in Närke in southern Sweden on Friday. A man in his twenties is suspected of drink driving.

Three young people were also seriously hurt when their car flipped into a ditch on the E6 near Kode in western Sweden on Saturday.