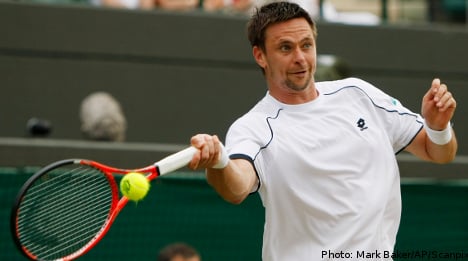 The 25-year-old could be forgiven for wanting to have avoided another meeting with Nadal just weeks after the Spaniard defeated him in the French Open final.

The Spanish second seed booked his place in the quarters with a 6-4, 6-2, 6-2, win over France’s Paul-Henri Mathieu on Monday, easing concerns over his fitness.

Nadal, who won that Roland Garros showdown to clinch his fifth French crown, has been bothered by a knee injury since arriving at the All England Club last week and he has needed pain killers and physiotherapy to keep the problem at bay.

Nadal fights a constant battle with his knees after tendinitis forced him to miss Wimbledon last year, but he has vowed to play through the pain barrier in his clash with Söderling who has been in fine form at the grass-court Grand Slam after winning his first three matches without dropping a set.

Faced with an formidable opponent like Ferrer, the Swede could call on his accurate serve and over-powering ground-strokes to win the key points as he reached the last eight here for the first time.

Nadal and Söderling have plenty of history on the tour and the tie promises to be an explosive encounter.

Söderling once irritated Nadal by mimicking his habit of pulling at his shorts before serving, as well as imitating his slow build-up to each point.

Nadal made it clear he was not happy with the perceived insult, although he insists he has not had any problems with Söderling since.

“I had a little bit of a problem (with Söderling) in this tournament a few years ago. After that I never had any problem with him,” Nadal said.

Nadal will go into the match as favourite after drubbing Söderling in three sets in the French Open final recently, but the Swede can point to his win at the same venue 12 months ago as proof that the Spaniard can be beaten.

While Nadal knows it will be harder to beat Söderling on grass than clay, he has no doubts he can advance to the last four.

“I think the match is completely different (to the French Open final) because it’s on grass than on clay,” Nadal said.

“I think he’s playing with big confidence and a big serve. So he’s playing great. It is going to be a very difficult match for me I think. But hopefully for him, too.”