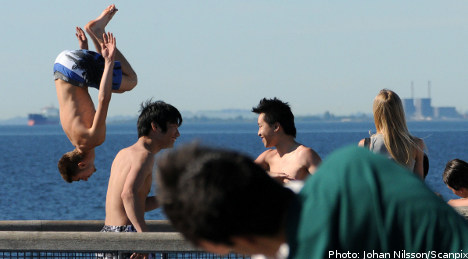 By 4pm the highest temperature was recorded at 27.8 degrees Celsius in Eskilstuna in eastern Sweden as much of the country enjoyed temperatures in the high twenties as the first real bout of summer warmth swept the country as many begin their annual holidays.

While the Eskilstuna high remained lower than the 28.2 degree record set on May 15th in Haparanda in the far north of the country, meteorological office SMHI expects this record to be surpassed when final readings come through at 8pm.

Wednesday is forecast to bring with it some more changeable weather in the south with some rain in northern areas. A new high pressure front is expected to push in on Thursday however bringing sun to the south, with some residual rain and thunder in the north.

By Friday the summer sun will have set up camp over Sweden for the weekend with temperatures of around 25 degrees in the south and 20 in the north.

Tuesday’s expected record highs are expected to last only until Saturday with 30 degree temperatures forecast on the east coast.

After a rainy Sunday in some parts, SMHI expects next week and the traditional holiday month of July to open with renewed high pressure with sunny and warm weather in most parts of Sweden.