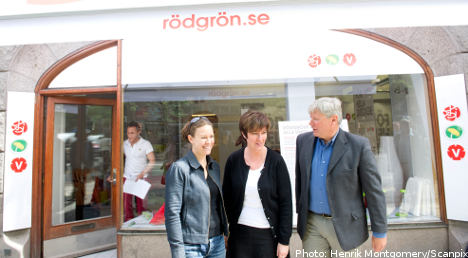 At the same time, youth support for the ruling Alliance coalition is at a record low, a special survey done by Sifo for Svenska Dagbladet shows.

“The government’s problem regarding young people is probably that they have not come up with a vision of the future,” Toivo Sjörén, who is responsible for Sifo’s opinion polls, told the newspaper.

The latest poll, conducted earlier this month, revealed that the centre-left red-greens have 56 percent support among 18 to 29-year-olds compared with 32 percent for the centre-right Alliance, a gap of nearly 25 percentage points.

“They (the youth) do not think that taxes are important, they are interested in the bigger picture and want to talk about their future and they are mainly are attracted to the Green Party,” Sjörén explained.

Sjörén added that young people are more trend-sensitive and more fickle in their political allegiances. This is particularly evident among the youngest voters: about half a million are eligible to vote for the first time in September.

The party with the highest youth support is the Social Democrats at 34 percent and the Green Party at 16 percent. The Left Party has the same level of support as in the regular Sifo poll at around 6 percent.

Separately, the nationalist Sweden Democrats and the Pirate Party together have the backing of nearly 12 percent Sweden’s youth.

The centre-left parties have held the upper hand among Sweden’s younger voters since the late 1990s. In the 2002 election year the gap was at its greatest, with the left-leaning coalition enjoying almost twice the support of the centre-right.

High youth unemployment which persisted in the 2000s meant that support waned for the sitting Social Democrat government among the nation’s younger generations and during 2005 and 2006, support was almost even.

The government retorts that significant numbers of young people registered as unemployed are in fact students.

Despite the low confidence shown by Sweden’s youth, the same Sifo poll indicated that overall support for the centre-right coalition had eclipsed the opposition for the first time since the 2006 election.