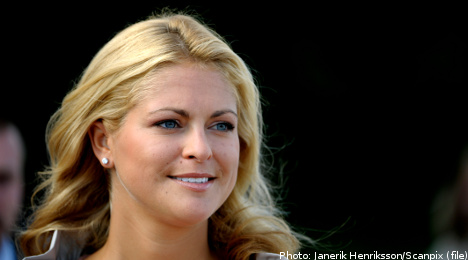 Twenty-eight-year-old Madeleine will attend her first official event since the separation was announced in late April, hosting a charity gala in London for her mother’s organisation Childhood, according to the Expressen daily.

“We are glad that she is coming,” Childhood USA executive director Charlotte Brandin told the newspaper. “We will have paying guests who want to know more about the organisation.”

Madeleine will represent Sweden and Childhood at the function. Around 200 people are invited and there will be dancing, dinner and a charity auction.

Madeleine travelled to the US at the end of April to fulfil a series of engagements and to escape the media glare after revelations over Bergström’s alleged dalliance with a Norwegian handball player.

Calls from the palace to leave the princess in peace as she adjusted to life without her erstwhile fiancé fell on deaf ears, however, as Scandinavian media were joined at Newark International Airport by international paparazzi photographers.

Princess Madeleine’s engagement book was scheduled to keep her in the US until May 9th, with a lengthy spell at the World Childhood Foundation, an organization founded by her mother Queen Silvia, ending with the trip to Seattle.

However, a heartbroken Madeleine never made the trip to Seattle, with Crown Princess Victoria attending instead. Last month, the Royal Court confirmed that the princess had decided to take a time out from official engagements before attending her sister’s wedding.

Madeleine returned to Sweden just days before the June 19th nuptials, but appeared in good spirits as she enjoyed the day in the glare of the Swedish public and the world’s media.

Princess Madeleine, and Bergström, a 31-year-old Stockholm lawyer announced their engagement in August. The news took many royal watchers in Sweden by surprise coming so soon following her big sister’s news. The pair announced their split in late April after an often-stormy eight-year relationship.