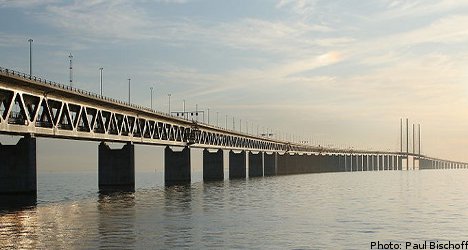 When Malmö launched its Malmö Festival around 20 years ago, local daily Sydsvenska Dagbladet printed up t-shirts that said: “If you have seen Malmö, you have seen the world.”

Soon after, neighbouring Lund launched its riposte: “If you have seen Lund, you don’t need to see Malmö.”

This little anecdote tells you something of the challenges facing Malmö at the end of the last millennium as the raw port city struggled to find its feet at the dawn of its post-industrial era, blighted by high rates of unemployment and industrial decline.

The opening of the Öresund road-rail link on July 2nd, 2000 tied the Scandinavian peninsula to the continent in perpetuity and helped to kickstart a dramatic change in the fortunes and image of the city, home to almost 300,000 people.

“The bridge manifested primarily a mental change. Physically, it is like an isthmus that connects us to the continent. We had always felt close to Denmark, but the bridge was like a pointer – symbolically, it showed the way forward,” Malmö resident Björn Hofvander tells The Local.

The Öresund Bridge, officially known as the Øresund bridge to reflect a combination of the Swedish and Danish spellings (Öresundsbron and Øresundsbroen), cost 30.1 billion Danish kronor ($4 billion in 2000 figures) to build and consists of a 7.85-kilometre bridge and 4.05-kilometre tunnel via the artificial island of Peberholmen.

The project was forecast to recoup its costs by 2035 and would be entirely user-financed, but perhaps due to initially prohibitively high costs, the bridge got off to a relatively slow start. However, since 2005, traffic has steadily increased and there are now few who question its success.

The completion of the bridge was followed closely by the start of the development of Västra Hamnen – an area long associated with perhaps the most prominent symbol of the city’s industrial past, the Kockums shipyard crane.

Much like the festival slogan revisited above, the city’s attachment to the long-redundant dockyard crane was shaped by a tangible self-deprecating humour that visitors to the city can soon testify to. Its removal was not without controversy and the crane’s silhouette can still occasionally be spotted on t-shirts worn by Malmö’s more fashionable and heritage-savvy parents.

“To the older generation, the crane symbolised a safe old employer. They could remember when the dockworkers moved around the area. For the young, it was a landmark – a visual symbol,” Hofvander says.

While Malmö is a city that looks proudly on its industrial past, the development of Västra Hamnen, and the Turning Torso skyscraper at its heart, served to send a message that Malmö’s focus had shifted and it was looking forward to the future with optimism and self-belief.

“You could say that the Turning Torso has replaced the Kockums crane as a symbol of the city. It has made an impression and everyone has a relation to it one way or the other,” Hofvander says.

Västra Hamnen, with its penthouse-style apartments and sea views accompanied by hitherto unheard of prices, signified that Malmö was a city to be lived in again after decades of middle-class suburban flight. Hofvander, who moved back into the city with his family in 2008 after an eight-year hiatus, points out that the new area of the city has become a popular meeting place.

“I think people feel that it is an exciting area. It has expanded the city and they have succeeded in creating accessibility, things happen there that are open for all.”

Many of the newcomers to the city during the 2000s were Danes who found that their money went considerably further in Sweden, with the completion of the bridge rendering a cross-Öresund commute a viable alternative.

According to Öresund Bridge Consortium statistics, 16,000 people commute to work across the bridge-tunnel link. One of them is Martin Palmer, who works at Copenhagen’s Kastrup Airport and remembers commuting across the sound when the sea route was the only option.

“I save almost two hours by commuting across the bridge,” he says. “It is very convenient, just about the only thing I miss is the banter with your colleagues on the boat back on Friday afternoon. That was nice.”

“Most of the commuter traffic goes from Sweden to Denmark. But it has benefitted Sweden too in the number of Danes coming over to shop and some of whom stay to live,” Palmer says, adding that access to the much larger labour market of Denmark’s capital has been of particular benefit to new Swedes and young people.

“The Swedish labour market is notoriously hard for young people and immigrants. In Denmark, it is easier to find entry-level work,” he says.

Malmö is a popular destination for immigrants to Sweden and integration remains one of the key challenges facing the city, where over a third of the population is foreign-born. The issue remains sensitive, as was illustrated recently when comments made by Mayor Ilmar Reepalu were taken to indicate an ambivalence to the problems experienced by the city’s Jewish community.

Loose talk aside, Social Democrat Reepalu’s role in helping to transform the city from one of high unemployment and past industrial glory into a thriving multi-cultural and enterprising knowledge-based city is widely recognised by the Malmö electorate, who have stayed loyal to the party throughout the decade.

One of the key developments under Reepalu’s tenure is the establishment of Malmö University in 1998. Malmö had identified education, alongside arts and culture, as one of its key growth areas and the university was an audacious attempt to challenge the regional educational hegemony of nearby Lund.

“Malmö University realizes that it can not compete with Lund’s tradition and history. We have to attract the students that don’t go to Lund for whatever reason and offer something different,” says Malin McGlinn, a course coordinator at the university, to The Local.

The university’s main campus is located in another area of the former docklands and those arriving at the central station can’t help but notice the audacious confluence of buildings across the lock to the south.

In its 12 years of operation, the university has grown from an initial student body of 5,000 with a predominant focus on teacher training to Sweden’s ninth-largest seat of learning and overall biggest university college, offering a full range of study and research alternatives to its 23,000-strong student body.

While 62 percent of the students come from Skåne, the university works hard to profile its international perspective and Öresund identity.

“We have close cooperation with Copenhagen and Roskilde universities and many of our students attend exchange programmes there,” McGlinn says. “The university also works hard to attract students with non-Swedish backgrounds who need to acquire the qualifications required to enter the Swedish labour market.”

The 650 kilometres to Sweden’s capital Stockholm means that ambitious Malmö residents are as likely to look to Copenhagen, Brussels, London or Frankfurt when seeking career advancement. The completion of the bridge has served only to further reinforce the oft-quoted feeling that Malmö is “closer to the continent.”

Malmö was founded around 1275 and originally known as Malmhaug or “Gravel pile”, it was long Denmark’s second city. While some would argue that it remains so, one thing is for certain – the city no longer resembles a pile of crushed rock, and while the bridge has made it significantly easier to get away, it has also helped to make Malmö well worth a stopover, even for those who have seen Lund first.