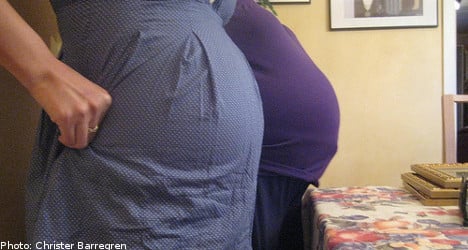 At the same time, the number of deaths declined by 3 percent, to 46,486 people, according to a new report from Infotorg.

“Our previous figures from 2009 indicated that a baby boom was looming,” said Patrik Attemark, InfoTorg CEO in a statement on Thursday.

The report indicates that immigration is 70 percent higher than emigration, despite a 35 percent hike in the number of those leaving Sweden in comparison with 2009.

“Sweden will continue to see pregnant bellies and baby carriages in increasing amounts in the streets. At the same time, we note a reduced number of deaths, a trend that indicates a prosperous population living longer,” Attemark said.

The Infotorg report is based on figures from the Swedish Population Address Register (SPAR), which are based on an average daily change over a given month multiplied by the number of days in the month.