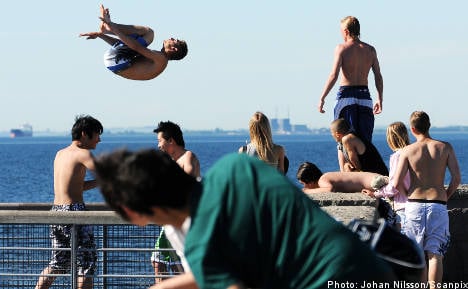 Large swathes of the country saw the thermometer hover around 30 degrees for much of the day.

A high for the day of 32.1 degrees was recorded both in Såtenäs in the south west and in Forse, 700 kilometres further north.

Eskilstuna experienced the warmest weather in the central region of Svealand with 31.2 degrees, while Lycksele led the way in northern Norrland with a top temperature of 27.2 degrees.

But Saturday’s balmy temperatures still lagged well behind the hottest July day ever recorded in Sweden, an honour held by Ultuna, 70 kilometres north of Stockholm, which sweltered in 38 degree heat in 1933.

Temperatures are forecast to reach 30 degrees again on Sunday before dropping to 20-25 degrees over the coming week. But the summery highs are expected to return again just in time for next weekend.