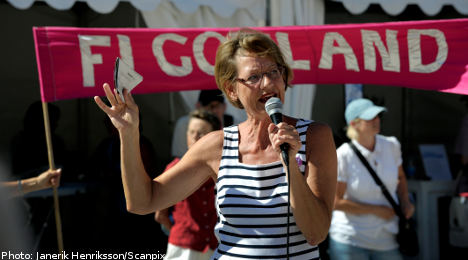 The Almedalen Week is annual event since 1982 and features speeches, seminars and other political activities, and is considered an important forum in Swedish politics.

“Sure this means a lot to us and our possibilities to be seen and heard – these are normally very limited,” Schyman told news agency TT in Visby.

Schyman held a meeting on Sunday at the Donners plats square and used the opportunity to argue for a shorter working week, shared parental leave and just salaries – including among other things an “equality fund” amounting to 70 billion kronor ($9.12 billion).

The charismatic former Left party leader and Fi are set to have an active Almedalen week with a slew of speeches, debates, seminars and duels scheduled.

Schyman repeated her criticism that Fi is not given a place in media political debates and was critical that polling institutes do not divulge Fi’s support separately.

“This we are very frustrated, disappointed, and angry about,” she said.

“If we are to protect democracy then more democratic movements need to be presented aside from those occupying power,” Schyman continued.

The Almedalen Week – where parties, authorities, companies and organisations spend million on hours, premises, speakers, food and drink – is an important forum where Fi can on a cost-efficient basis, promote its message of equality, Schyman said.

She sees the week as the start of Fi’s election campaign. Schyman is positive ahead of the election, and compared how the Green party has pushed the other parties into realizing that environmental issues are a field of knowledge. Fi can fulfil the same function with regards to equality, Schyman believes.

“We are that force in Swedish politics.”