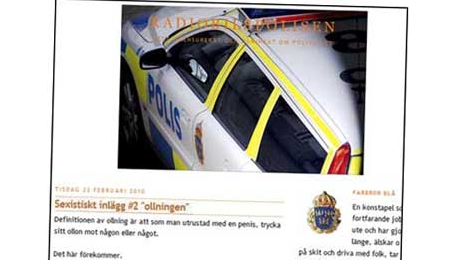 The National Police Agency’s (Rikspolisstyrelsen – RPS) staff disciplinary board decided in June to dismiss the man with immediate effect after establishing that the officer was indeed behind the indecent blog posts which constituted a serious breach of discipline and were deemed to damage the reputation of the police force.

But the police unions have now reacted to what they argue constitutes a case of unfair dismissal and have submitted an application to The Swedish Agency for Government Employers (Arbetsgivarverket) to have the decision overturned.

“We demand that the decision is overturned. The Police Union does not consider there to be factual grounds for dismissal. We demand general and economic compensation,” the union wrote in its application on behalf of the officer.

Writing a blog under the pseudonym Farbror Blå (Uncle Blue), the officer revealed that he and his cop buddy “bell-ended”* the door handles, window buttons, gear stick, steering wheel, stereo buttons and the police radio buttons, as well as the receiver used to talk to the operations room”.

The practice of bell-ending, or ollning, involves a man touching an object with his glans and has established itself as a recurring form of practical joke in Sweden. The term comes from ollon, the Swedish word for glans.

“When the girls had driven around for an hour or so in the bell-ended police car we had a chat with them and revealed our bell-ending exploits,” and “now we know what a facial expression of bleak anxiety looks like,” were sample of posts from the blog, ending with a smiley face.

‘Uncle Blue’ also wrote in lurid detail about a call-out to a student residence where a mentally unstable young woman allegedly made sexual advances towards both him and his partner.

Further blog posts included details of how he shook hands with a man who had just hanged himself, provoking guffaws from his colleagues. He also claimed it felt “damn good” to punch somebody in the mouth.

When police management became aware of the blog through a newspaper, the policeman said that everything was made up and intended as a joke.

The police officer had previously been suspected of sexual assault, but the prosecution noted that it was not possible to connect anything he had written to the actual events and decided not to prosecute him.

However, the Police Authority (Polismyndigheten) in Skåne recommended that the police officer be dismissed regardless of whether the stories were true or not and the disciplinary board followed the recommendation.

*Translation note: Bell-ending, a neologism derived from a slang term for the glans, is not a word in common English-language usage.