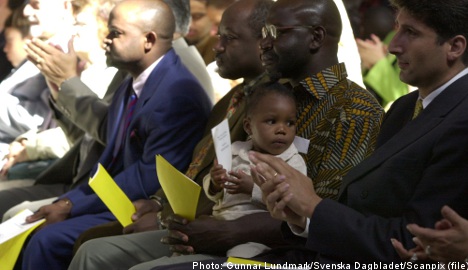 Sweden also topped the list in 2008 when comparing the rate of citizenship acquisition against the total population of each member state, with 3.3 citizenships per 1,000 inhabitants, ahead of Luxembourg at 2.5 and France, Portugal and the UK at 2.1 each.

Ten member states granted less than one citizenship per 1,000 in 2008, with Poland registering the lowest rate, followed by the Czech Republic, Lithuania and Slovakia. The EU average was 1.4 citizenships granted per 1,000 inhabitants.

In some member states, a large part of the citizenships was granted to citizens from only one country. The member states with the highest concentrations were Romania (89 percent of new citizens came from Moldova), Hungary (68 percent from Romania), Greece (59 percent from Albania) and Bulgaria (51 percent from Macedonia).

In Latvia and Estonia, 96 percent and 92 percent respectively of the new citizens were recognised non-citizens. The majority were citizens of the former Soviet Union.