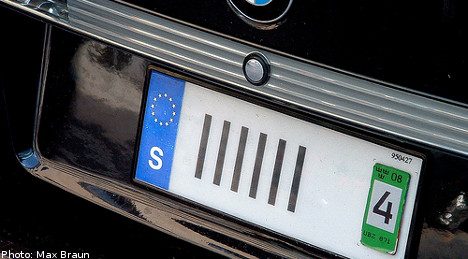 The agency rejected an application from a man in Halmstad in June for a number plate with the letters SS as the apparent connection to Nazi Germany was considered to risk offending road-users.

“Personal registration plates captures the attention of others – a good idea for you to show who you are!,” agency writes on its homepage, but it seems that Gestapo-themed plates are not alone in being perceived to cause offence by administrators.

Names such as Sexyboy, My BMW, Come On, HEINEKN, and Beetle have also fallen foul of the agency in recent months, the news website has reported.

“Proposals may not cause offence,” Tanya Celik at the agency told GP.se.

According to transport agency guidelines the process to apply for a personal number plate takes about ten days and costs 6,000 kronor ($784).

The plates must be between two and seven characters, including spaces, and can be made up of a combination of letters and numbers.

“If you want to use a combination which corresponds to a product or company name then you should contact the trademark holder and received written consent,” the agency writes.

The guidelines explain that all applications are subject to the approval of an administrator and cites the most common grounds for rejection is if the suggestion can be considered to cause offence.

“We discuss why we think it is not a good suggestion and then if we agree it is rejected,” Celik told GP.se. If agreement is not reached among agency staff then a lawyer is available to advise on the matter.