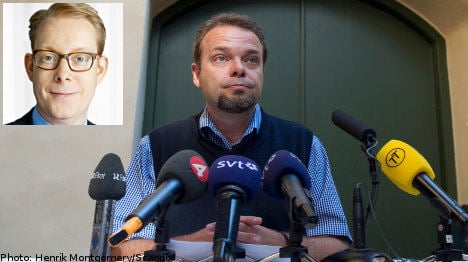 Prime Minister Fredrik Reinfeldt confirmed a press conference on Wednesday that he had accepted Littorin’s resignation.

“I have today, on Sven Otto Littorin’s request, removed him from his ministerial post,” Reinfeldt said adding that Billström was a natural stand in as the issues are closely related.

Sven Otto Littorin announced his decision to resign in a press conference of his own in Visby on the Baltic Sea island of Gotland on Wednesday morning.

“There are three reasons for this and those reasons are called Emma, Gustav and Arvid. They are my three children, who have had to pay the price of my public office,” a clearly emotional Littorin said.

Littorin attended district court on Tuesday in connection with the custody proceedings and after the session was over, he decided that he no longer had the energy to continue as a minister.

Sven Otto Littorin has been employment minister since the 2006 general election. Prior to his post in the government, he represented the Moderate Party as party secretary.

Forty-four-year-old Littorin has previously worked at a PR bureau, been a member of several boards and worked as a political expert for Bo Lundgren at the Ministry of Finance from 1991 to 1993.

“For me, my children are worth more than my job, my career or anything else,” Sven Otto Littorin said. “I have reached my limit. I am no longer prepared to pay this price – for my children’s sake, for my sake and for my fiancée’s sake.”

Littorin said that media coverage of his custody battle had been incredibly taxing.

“Now that it has been laid clear that the conflicts with my ex-wife are set to continue, it is clear that I cannot cope.”

Littorin told of the telephone calls from his daughter, when he himself was at the hospital with a heart complaint, that their home had been inundated with reporters.

“I was and am completely powerless in this situation and cannot, as a father, protect my children,” Littorin said.

Peter Esaiasson, professor in political science, does not believe that Littorin’s resignation will have any significant effect on the election campaign.

“Very small. The Moderates have to find another spokesperson for labour market issues and it is to be presumed that there are other leading politicians who are versed in these questions.

“It is so much better for the government that the resignation is due to personal reasons. It is then simply one wheel to be replaced by another wheel and there are very few wheels that are extremely important,” he said.

However, Esaiasson noted that it is very unusual that a cabinet minister resigns so close to an election.

“The only one I can come up with off the top of my head is Olof Johansson before the 1994 election.”

Prime Minister Fredrik Reinfeldt did not participate in Wednesday’s press conference and his spokesperson said it was unclear when he would comment on Littorin’s departure, which comes just two months ahead of the next general elections scheduled for September 19th.