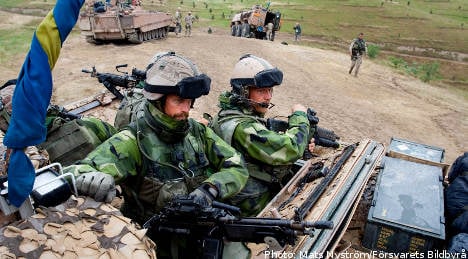 The rules mean that the mission can not only use fire in self-defense, but should be able to independently plan its operations.

In early March, the former head of the Swedish mission in Afghanistan, Christer Tistam, made an inquiry about greater authority to use force. He believed that the soldiers should be allowed to use force themselves before they are attacked and not only in self-defense.

According to Rapport, Supreme Commander Sverker Göransson decided that new rules of engagement should be used. The rules mean that the mission will not only be able to use fire in self-defense but should be able to independently plan its operations, including the use of lethal force.

“I neither confirm or deny it,” Armed Forces Lieutenant General Anders Lindström told Rapport. “We have well adapted rules for the units that are serving in Afghanistan and they follow the rules that apply to troops in the ISAF (International Security Assistance Force). Exactly who they are, we are not commenting.”

Four Swedish troops have been killed since Sweden began sending troops to Afghanistan in 2002. Sweden has contributed 500 soldiers to the international force in Afghanistan.