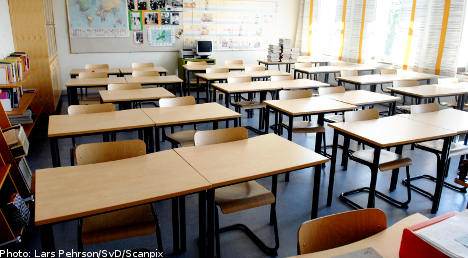 The authority received 1,357 complaints about deficiencies in schools in the first half of 2010 alone, an increase of nearly 80 percent over the same period in 2009. Skolinspektionen and BEO, a unit of Skolinspektionen, received a total of 1,542 complaints combined all of last year.

“It is an incredibly large increase and it applies to all file types,” said inspectorate director-general Ann-Marie Begler. “One explanation may be that the school issues are more in focus and that more people have become aware of their rights. Skolinspektionen has also become a well known authority.”

The reason for the dramatic rise in complaints is not immediately clear, and Begler argues that perhaps the ease of reporting has more to do with it than actual changes in the real world.

“We do not yet know what the increase is due to. We have implemented a number of changes that may have influenced it, for example, making it possible to lodge a complaint over the web. However, it could also be due to the Schools Inspectorate and the BEO becoming better known and that students and parents have more confidence that we can help them.”

The half-year figures are preliminary, but show a clear increase in all areas. At least 500 concern abusive treatment and at least 233 to related special assistance, while there may be more. Over 400 cases have not yet been categorised.

The schools inspectorate will address the increase by reallocating resources so that more officers can investigate complaints.

“We do everything that we can to keep processing times short,” said Begler. “Investigations must be completed within five months and any possible claims must be directed to the schools in the meantime. For a student who is mistreated, it still takes a long time.”

Skolinspektionen started its activities in the autumn of 2008, with expanded resources in relation to its predecessors at the Swedish National Agency for Education (Skolverket). The ability to send in complaints online, faster processing, more clearly worded criticisms and better follow-up have led it to be regarded as more worthwhile to report bullying or failures in teaching, according to Begler.

“Such a dramatic change in the number of complaints from one year to another is not due to large changes in the real world, but a tendency for more reports,” said Begler.

As such, she regards it as a positive sign that the complaints are increasing.

“Obviously, it is not positive that many children have difficulties in school, but it is a positive sign that there are more complaints so that there can be a change,” said Begler.

The largest group of notifications involve abusive behaviour, including students who have been teased, beaten or isolated. So far this year, there have been 413 complaints in this category to the BEO, compared with 603 in all of 2009.

“The increase indicates a greater awareness among students and parents that one is entitled to a safe environment,” said Lars Arrhenius of the BEO.

Nor does he see any signs that the climate would have been worse in school.

“If you look at Skolverket’s attitude, it has not been worse, but slightly better. Mistreatment is a problem that did not receive enough attention in the past,” said Arrhenius.