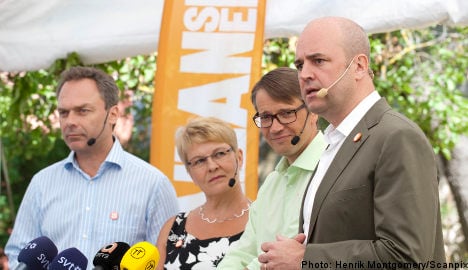 Three billion kronor would go to municipalities and the remaining 6.2 billion to elementary schools, teachers and apprentices, the coalition added.

In order to compensate for weak revenue growth next year, the municipal government sector will receive a temporary government contribution of 3 billion kronor. It will be used to protect the health care and social services systems and activities aimed at children and young people.

“We do it because we still feel the need to bridge over the bad situation that has taken place through the recession,” Centre Party leader Maud Olofsson announced at a press conference with the Alliance coalition leaders in Visby during Almedalen Week.

The remaining 6.2 billion would be spend from 2010 to 2014, with a focus on primary education, teachers and apprentices. Targets would include funding teacher training, increasing the amount of spend teaching mathematics in primary schools, expanding the apprenticeship system in senior secondary and adult education and the introduction of grades starting at around age 11.

The government also proposes additional places for adult trade classes for the 2010 to 2011 academic year. Liberal Party leader and education minister Jan Björklund singled out the issues that the government wishes to address.

“There are gaps in the transition from school to work,” he said.

Olofsson, who is also the deputy prime minister and minister for enterprise and energy, spoke about how the struggle for jobs has become increasingly global and singled out educational needs in science and mathematics.

She pointed out the goal of the government’s drive to increase interest in the subjects.

“We have seen that it is declining,” she said.

“The Swedish school system cannot succeed if we do not have good teachers,” he said.

The government said the latest figures show that municipalities may undergo greater economic development in the coming years. However, municipal revenue growth may still be relatively weak in 2011.

“A big disappointment and a major betrayal of Reinfeldt’s promise to safeguard welfare,” he said.

Östros argued that the extra 3 billion kronor in municipal money next year is “totally inadequate” to counter a trend towards fewer teachers in schools and larger classes in preschool.

The red-green coalition has promised to invest 12 billion kronor more than what the government has budgeted on welfare in 2011 and 2012.