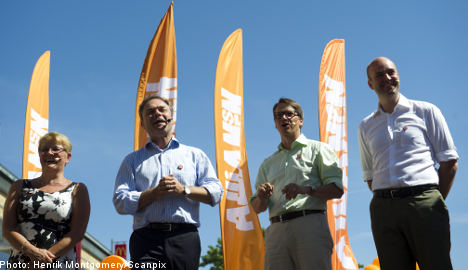 The Moderates remained the largest party, according to the Expressen and Demoskop electoral barometer, although suffered a 2.4 point drop since the previous poll.

The Centre Party and Christian Democrats made gains, while the Liberal Party (Folkpartiet) backed slightly. Taken together government parties held a lead of 4.9 points, down from 6.6 in the previous poll.

“We have the wind in our sails now and the opposition are facing a headwind. But it differs so little and it is enough that a couple of percentage moves from one side to the other so it is evenly balanced,” says Christian Democrat leader Göran Hägglund to Expressen.

The Social Democrats and the Left Party made gains in the poll, while the Green Party declined.

“It will be very even, the polls show that clearly and I have been saying this for three years,” said Social Democrat leader Mona Sahlin to the newspaper.

The nationalist Sweden Democrats climbed 1.2 percentage points, meaning that they have sufficient backing to claim seats in parliament, were an election held today.