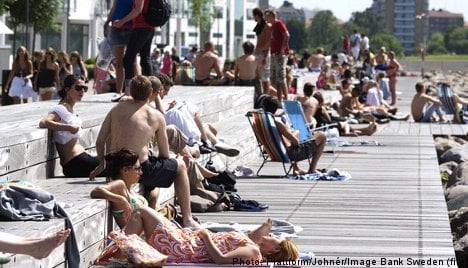 This was the highest reading measured in Sweden since 1994. Hästveda was joined by other Swedish localities with temperatures above 30 degrees on Saturday.

Målilla in Småland was 34.2 degrees and Norrkoping and Kolmården in Östergotland south of Stockholm both registered temperatures above 33.8 degrees, according to the Swedish Meteorological and Hydrological Institute (SMHI).

In addition, in a number of places in Skåne, Gotland and around Stockholm, temperatures stayed above 20 degrees throughout the night for a so-called tropical night.

On Sunday, temperatures could rise even higher.

“We will probably see that it will be even a bit warmer,” said Alexandra Ohlsson, meteorologist at SMHI.

The heat could creep up against the Swedish record of 38 degrees, measured both in Ultuna in southern Uppsala in 1933 and in Målilla in 1947.

Far to the north, temperatures are still lower. In addition, there is talk of thunderstorms in the western part of the country and the areas bordering the Baltic Sea at the start of the week, according to Ohlsson.

In the coming days, the heat is expected to remain mainly in the eastern parts of the country. Only starting in the middle of next week will slightly cooler air come through southern Sweden.

On Thursday, the rainfall area is expected to withdraw to the west coast. Currently, there are very dry conditions in southern Sweden, on Öland, Gotland, Blekinge and around Kalmar. There may possibly be rain in these dry parts of the country starting on Thursday evening or throughout Friday night, according to SMHI.

“It is also possible that it can move up to Mälardalen,” said Ohlsson.