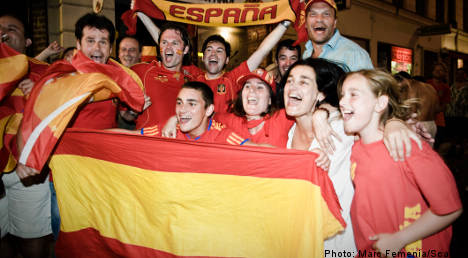 Spain won the final with a goal by Andrés Iniesta in extra time, ending the Dutch hopes of an upset, and proving that the Spanish have finally buried their underachievers tag that has plagued them in previous championships.

“I feel so happy, the team worked so hard to get where they are. It is a moment of pride for all of Spain, especially because the economic crisis has hit us so hard,” gushed Eva Jusdado Monjil at the Cervantes Institute to The Local after the game.

The Cervantes Institute and the Spanish Tourist Bureau had chosen the fine old music venue of Mosebacke to host its viewing party to celebrate Spain’s first World Cup final appearance.

The venue was packed to the seams with with throngs of red and gold chanting “Vamos Espana, soy Espanola, Ole” throughout the duration of the game.

Meanwhile, a few hundred metres down the hill the Dutch embassy had once again opened its doors with the warm hospitality that has made it a popular haunt during the tournament.

The bar, selling Dutch beer at 30 kronor a bottle at a rapid pace during the game, emptied soon after English referee Howard Webb blew time on one of the most challenging matches of his career, featuring a record 13 yellow cards and one red.

A palpable silence fell over the courtyard of the embassy as the fans streamed out to Götgatan to meet the oncoming jubilant Spain supporters.

But while several of the Dutch players angrily surrounded referee Webb in the Soccer City stadium, the Stockholm Oranje instead displayed a warm and magnanimous generosity as they mingled with their Spanish conquerors on the street.

The Spanish flowed down the hill from Mosebacke chanting “Ole, ole, ole, ole” at the top of their collective voice and the Dutch quickly joined the celebratory mood, perhaps aware that their team, despite the often brutal tactics deployed in the final, had done their country proud over the course of the tournament.

The scenes on Södermalm’s main shopping and night-life thoroughfare gave a telling illustration that despite the tension, despite the high stakes, despite the often brutal tactics deployed, the football, in the end, proved the big winner.

Other groups of happy Spanish fans filled the fountain at Sergels torg to cool off as Sunday obliged with suitably Mediterranean temperatures on the warmest day of the Swedish summer so far.