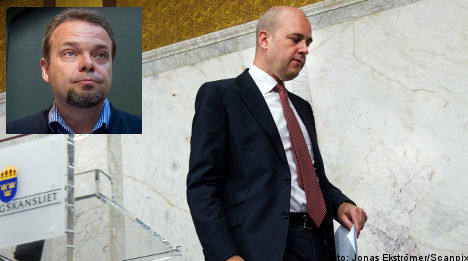 In the Sifo survey, published in the Aftonbladet tabloid which exposed the allegations against Littorin, 18 percent of respondents said that their confidence in Fredrik Reinfeldt has fallen after the affair.

In a further survey, by the Expressen daily and conducted by Demoskop, 31 percent of respondents claimed that their confidence in Reinfeldt had declined.

Confidence in the Alliance government has also fallen, by 32 percent in the Expressen/Demoskop survey.

Despite the figures, the vast majority of respondents – 62 and 65 percent respectively – responded that their confidence in the government remained unchanged.

Both studies show that it is primarily voters who vote for the opposition parties who had lost confidence in both the prime minister and the government.

The two studies were carried out on Monday with the Sifo study involving 1,000 people, and the Demoskop poll involving 752 people in an internet panel.

Aftonbladet on July 10th published allegations from a 30-year-old woman who claimed to have sold sex to Sven Otto Littorin prior to his appointment as a minister in 2006. The newspaper has also claimed that Littorin resigned his post a day after he was challenged to comment on the allegations.

Sven Otto Littorin has since denied the allegations and Fredrik Reinfeldt has denied any knowledge of them saying only that the ex-minister gave “several reasons” for his departure from the government.