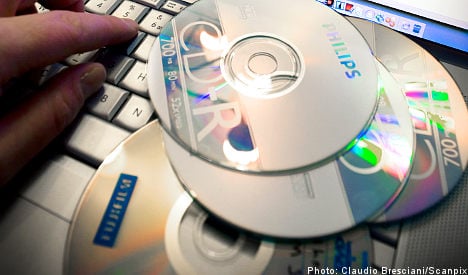 Income generated from a copy fee built in to the price of recordable CDs and DVDs – and shared among artists and copyright holders – has almost halved over the last two years. In 2007, sales of blank discs generated 200 million kronor ($28 million) for artists, compared to just 113 million kronor in 2009.

Copyswede, the umbrella organisation for copyright groups that administers the fee, believes the plunge in revenue can be attributed to a shift in the ways music and films are now consumed.

“We’re seeing a technology shift whereby the discs in themselves are no longer of interest. File sharers and others have started using different technologies. Things can instead be stored on people’s computer hard drives or their telephones,” Copyswede’s managing director Mattias Åkerlind told news agency TT.

Copyswede distributes the funds generated from fees that are included in the prices of recordable hard drives, mp3 players, and blank discs. But as its members’ revenues shrink, the organization is pushing for legislation that will extend the fees to other technologies.

“We don’t currently receive any revenue from hard drives or telephones despite legislation decreeing that fees should apply to any products that are particularly suitable for piracy. The pattern we think we’re seeing is one of piracy moving to external hard drives and USB flash drives while telephones are being used for storage,” said Åkerlind.

Copyswede’s proposed fee would add around 100 kronor to the cost of a mobile phone with 32 gigabytes of memory. But negotiations have stalled of late, with the organisation enjoying scant support from electronics retailers opposed to price hikes on goods like telephones and hard disks.

“We’ll probably have to ask the legislator for help and we’ve already approached the justice ministry about this matter. We’re hoping for a reaction by autumn,” said Åkerlind.