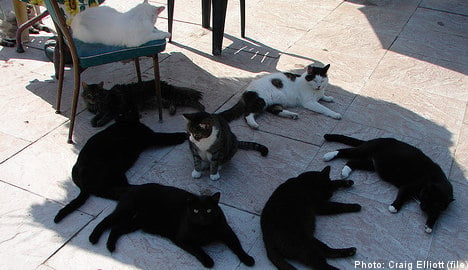 Stockholm’s social services, who had been alerted to the case, said the home in Botkyrka was in an appalling condition, with cats everywhere, including on tables, countertops and window ledges, sick or hurt animals, and overflowing cat litter boxes.

“There was an incredible stench of ammonia that made the air hardly breathable,” Marie Lundin, a Stockholm social services veterinarian, told the newspaper.

Many of the animals were sick or injured and 173 had to be put down at the house.

The remaining 18 cats were entrusted to animal shelters.

Under Swedish law a family can have a maximum of nine cats.

“Such people really love animals and have good hearts. They think they can take care of them, but we don’t agree,” she said.

Aftonbladet listed other cases in which social services had to intervene at the homes of over-enthusiastic animal owners.

A woman was for example discovered in 2007 living with 11 swans in a one-room apartment in Stockholm, and a man lived with 21 dogs in a three-room flat in Gaevle, central Sweden.