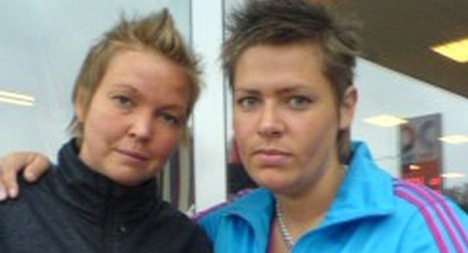 Sara Evaldsson, 29, and Maria Engström, 31, were living nearly 100 kilometres away from each other and had decided to move in together in Maria’s home town of Västerås. They both had permanent jobs, good credit ratings and had secured a good price for a 2-bedroom apartment in Västerås they wanted to buy.

But when they visited Maria’s bank in May last year to apply for a mortgage, they were given short shrift.

“The woman at the bank was very dismissive. We were going to buy the flat for a good price and we knew that it was a bargain. We had all sorts of papers with us, but she wasn’t interested.”

The bank clerk at Swedbank in Skiljebo, Västerås, said that the 490,000 kronor loan the couple wanted to borrow was “a lot of money” and insisted that a ten percent deposit would be necessary, Maria told The Local.

But when the couple questioned the bank’s decision, the clerk said:

“You should reconsider your personal situation and continue to live in different places.”

“We were shocked. We wondered what on earth she meant. We also wondered whether a heterosexual couple would have been given the same advice.”

“We were also surprised that she said it was a lot of money, as we knew that it was a bargain.”

The couple have now reported the incident to Sweden’s Discrimination Ombudsman.

“We didn’t think that this was an acceptable way to behave,” Maria said.

The couple approached rival bank Nordea later the same day and were granted a mortgage:

“They said immediately that it was a good purchase and that one of us alone would almost have qualified for that mortgage,” Maria told The Local.

The couple have since renovated the apartment and had it valued at over 800,000 kronor.

Anna Sundblad, Swedbank’s head of press relations, told The Local that the bank was sorry for what had happened:

“We take these kinds of incidents very seriously. We have a clear policy that we never discriminate on the grounds of religion, gender or sexual orientation. We also aim to set a good example in questions like this – we sponsor the Stockholm Pride festival for instance.”

“What will happen now is that our customer ombudsman will investigate the matter together with the Discrimination Ombudsman.”