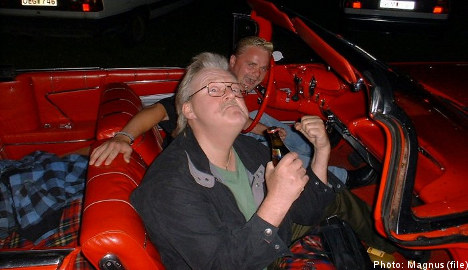 The grounds for the dismissal of the notification is that the car owner probably is not the publisher of the CD nor the producer of the radio program that played the song. JK also considers it doubtful that the track constitutes hate speech because it is clearly intended as a joke or satire against Nazism.

According to JK’s ruling on Tuesday, the regional public prosecution office in Borås in western Sweden had submitted a police notification report to JK for incitement of racial hatred regarding an incident that took place on May 14th.

The incident took place in a parking lot in Sätila between Gothenburg and Borås. A police patrol was called to keep order at a dance event. At the close of business, there were still 80 to 100 people in the parking lot.

A car with large loudspeakers on the roof played music at a high volume. According to the car owner, he played an Eddie Meduza song. In the chorus, the lyrics “Heil Hitler” are clearly sung. The notification was directed against the car owner and made by two of the officers who were called to the scene.

According to the ruling, JK took the text of the lyrics from the internet.

“The investigation of the case is not the source of the song that was played through the loudspeakers on the car,” JK wrote.

There would be several difficulties in investigating a possible breach of freedom of expression even if an investigation were launched and the car owner questioned, JK said.

“The words ‘Heil Hitler,’ taken individually, could be construed to include contempt against all Jews in the same manner as a public presentation of Nazi symbols, such as a swastika,” JK wrote. “These words cannot be taken out of context.”

However, “A comprehensive assessment of the text of the Meduza song indicates that it intended to be a joke or a satire about Nazism and stresses its terrible consequences,” JK ruled.

Rocker Meduza, who died in 2002, was known for his provocative lyrics about alcohol and sex.