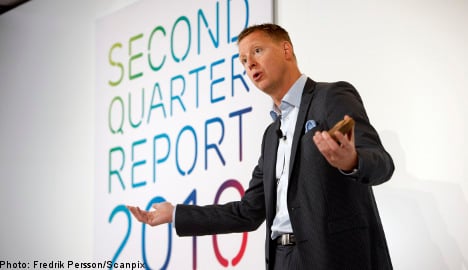 In the three months to June, Ericsson raised net profit from the equivalent

However, sales fell by 8 percent to 48 billion kronor, the group said, saying that sales had been held back by shortages of supplies and because customers were delaying orders.

The price of shares in the company, the biggest maker in the world of networks for mobile telephone operators, fell immediately by 5.5 percent to 84 kronor. The overall market here showed a fall of 0.7 percent.

CEO Hans Vestberg said that market conditions in the second half of 2009, when operators had moderated their orders, had continued in the first half of this year. In the second quarter, sales on a 12-month comparison had fallen in all regions except in North America.

However, compared with sales in the first quarter, the picture was less clear, with sales picking up in North America, northern Europe and in Mediterranean countries.