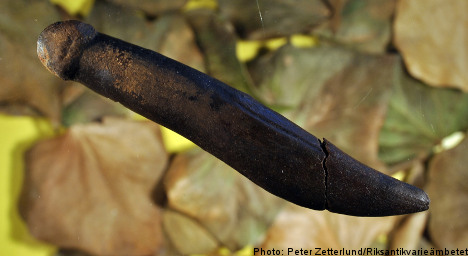 The object, 10-11 centimetres (4 inches) long and 2 centimetres in diameter, is being interpreted by archaeologists as a phallic plaything.

“First I thought it was just an antler that had been worked on and I was going to take a closer look at it. But when I held it up I wasn’t able to hold back the laughter,” wrote archaeologist Sara Gummesson on a blog maintained by the Swedish National Heritage Board.

The putative sex toy prototype was found at a Stone Age settlement on the banks of Göta Canal near Motala in southern Sweden.

“We do think it’s at least some sort of phallus but I couldn’t say for sure what it was actually used for,” Göran Gruber at the heritage board told Sveriges Radio.

Gruber added that there had been major international interest since pictures were posted online, with CBS, Fox News and the BBC all contacting the board for comments on the phallic find.

The object, believed to be 6,000 to 8,000 years old, was found embedded in a layer of mud and remained in excellent condition.