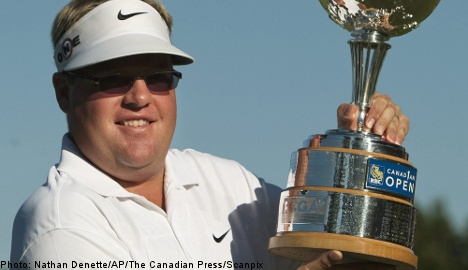 Pettersson, coming off a tournament-record 60 in Saturday’s third round, fired a three-under par 67 at St. George’s Golf and Country Club to complete 72 holes on 14-under 266 and defeat Wilson, the leader by four strokes when the day began.

“I still can’t believe I won the tournament,” Pettersson said. “I know it’s difficult to shoot another low one after a round like that, so I was just trying to downplay it. I just tried to stay calm and whatever happens happens.”

The Swede bogeyed at the fourth and seventh holes and Wilson appeared to be in command, but Pettersson closed the front nine with a pair of birdies, birdied the 11th and ran off three birdies in a row starting at the 13th hole with a 15-footer.

Wilson, 40, stumbled with bogeys at the 12th and 14th holes to hand Pettersson the lead after the Swede sank a 25-footer, falling two strokes off the pace with the European’s birdie from 4.5 feet at 15.

Both men parred the 16th and 17th holes and the 18th, playing the toughest hole of the week, ended with a par for Wilson. That allowed Pettersson, 32, the luxury of a closing bogey being good enough to capture his fourth career title at the $5.1 million event.

“I felt like I handled it well coming in,” Pettersson said. “I know I bogeyed the last, but after Dean didn’t make birdie, I sort of ginched that putt up there.”

Wilson, who was playing on a sponsor’s exemption, settled for an unsatisfying second.

“If you would have told me before the week that I could be second alone, I would have been tickled,” Wilson said. “Being in the position that I was, I’m a little disappointed. But still, lots of positives.”