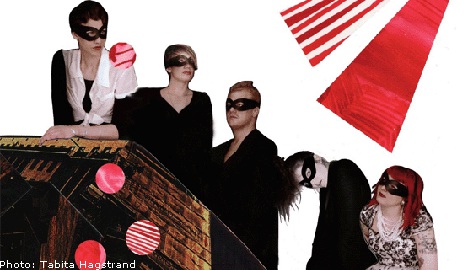 Although the Stockholm Pride Festival officially kicked off on Monday, launching a weeklong party celebrating LGBT rights, culture and politics, some activities got started even earlier.

In Södermalm, Galleri Kocks opened its doors to host the vernissage of collective art group Gardet’s new exhibition. In collaboration with the Pride Festival, a group of five young Swedish artists joined and created the collective.

Families, friends, and strangers joined together to toast and admire Gardet’s new works on Friday. The multimedia art exhibit is open to the public for the next two weeks during the Pride Festival.

“The show is not just for a gay audience. Gardet is not about queer art or sexuality, but for support. We are fighting for gay rights,” Lindén Strand told The Local.

In addition to contributing to the show, Lindén Strand is also the director of the art:up gallery, Stockholm’s first and largest queer gallery.

Erlandsson added that the show is about “making a statement,” but does not seek to label the art or isolate groups of viewers.

“If you isolate, it’s a step backwards,” he told The Local. “You want to leap ahead, not back. Everything should be for everyone.”

The theme of the Pride Festival this year is power. It is an invitation for Stockholm to question, debate and create their own interpretations of the word and its meaning.

Gardet’s exhibit is also built around the theme of power. Each artist worked in a different medium, creating highly personal pieces that explore their own interpretation of power.

The pieces range from colourful dreamlike paintings to elaborate textile works. One of the artists, Nilsson, is the first Swedish artist to display her blog in a gallery setting.

While each piece is different and extremely personal, when viewed together, each piece complements the other and helps to guide viewers to dig beyond the surface meanings. However, above all else, the Gardet artists want the exhibit to be enjoyable.

“Art can be deep, but also fun,” said Erlandsson. “It makes a statement about politics or society, but also brings people together for a party and to have fun.”

The opening was no exception. The gallery was steadily packed from 1pm to 6pm. An all-ages crowd ranging from tiny tots to retirees browsed the art and enjoyed ample supplies of champagne.

While Friday was the only day that the gallery passed out the bubbly, the artists want the “party feeling to continue for the whole exhibit” and urged visitors to come celebrate “extra openings” throughout the week.

Galleri Kocks is at Kocksgatan 18 just off of Götgatan near Medborgarplatsen. It is the perfect place for anyone to stop by, check out the show and show their support for Stockholm Pride.