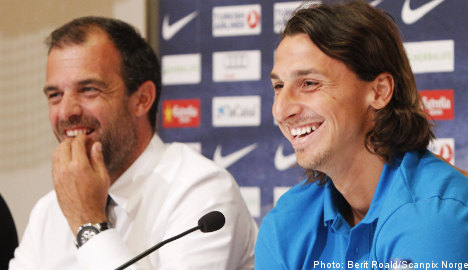 Ibrahimović and Guardiola in Oslo before match against Norway's Vålerenga

“I am a Barcelona player and I will continue to be one,” the 28-year-old was quoted by Barcelona’s website as saying at a news conference in Oslo ahead of a friendly against Norwegian side Vålerenga. “The rumours have not affected me because I have not had any doubts that I

want to stay. I have taken them as a compliment.”

Ibrahimović said Barcelona coach Josep ‘Pep’ Guardiola told him he was “important” to him.

“I will continue to work as hard as possible to maintain his confidence,” he added.

Barcelona signed Spanish World Cup hero striker David Villa, who shone during the World Cup from Valencia in May, fuelling speculation that Ibrahimović was on his way out. The Swede joined Barcelona from Inter Milan in last year in a deal worth €75 million (708.18 million kronor, $98.09 million), but he had a mixed first season at the Catalan club.