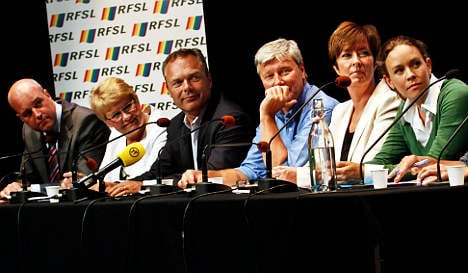 An inquiry carried out by the National Board of Health and Welfare has proposed removing both the sterilization and divorce requirements from the 1972 law.

At a party leader debate held on Friday as part of the ongoing Pride festival, Prime Minister Fredrik Reinfeldt said he was keen to modernize the law and expected a legislative amendment to come into force during the next term of government.

Both the Left Party and the Green Party wished to go further and called for an official review to examine the possibility of lowering the age limit, currently set at 18, for those wishing to change sex.

Christian Democrat leader and social affairs minister Göran Hägglund was the sole party leader absent from Friday’s debate. But he told news agency TT that he was not opposed to any of the changes proposed by the health board and would now await the outcome of the referral process.

“Sterilization is a major operation and it feels outdated. We must now find a way that is legally sound and works well for the people involved,” he said.

Hägglund also gave his backing to the removal of the law’s divorce requirement.

“The current legislation is from 1972, so it’s quite old. In light of the new [gender neutral] marriage law it should be possible to resolve this in a way that doesn’t necessitate divorce.”