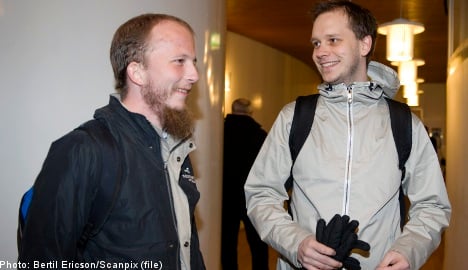 Sunde has appealed the ban, which carries a penalty fine of half a million kronor ($68,160), and rejects the claim that he is any way involved in the operation of the site.

“His involvement with The Pirate Bay has always been limited to the political issues which emerge. A ban would constitute the same thing as a political gagging,” Sunde’s counsel claimed according to district court documents.

The court’s decision is an interim ruling and is effective until the criminal case against Sunde and two of the other co-founders, Fredrik Neij and Gottfrid Svartholm Warg, is finally settled.

Four men accused of being connected with The Pirate Bay – Fredrik Neij, Gottfrid Svartholm Warg, Peter Sunde and Carl Lundström – were found guilty in April 2009 of being accessories to copyright infringement.

The four were each sentenced to one year in prison and ordered to pay 30 million kronor ($3.56 million) in damages. The convictions have been appealed and a hearing is expected in the autumn.

Despite the convictions The Pirate Bay has continued its operations aside from a few brief interruptions and the film companies launched a parallel legal battle in October last year against the founders, whom they consider to continue to run The Pirate Bay. The companies demand that the founders pay a fine of several million kronor if they do not cease and desist.

In an August 21st 2009 decision the court banned Black Internet AB from continuing to supply internet bandwidth to The Pirate Bay under threat of fines.

Fredrik Neij and Gottfrid Svartholm Warg were furthermore banned by the court on October 28th 2009 from involvement in the operations of The Pirate Bay.

Both decisions were appealed to the Svea Court of Appeal.

As Sunde could not be served a writ of summons in court last autumn, the court could not examine the question of a fine against him until July 23rd, when the decision was announced. A decision which he has now appealed.