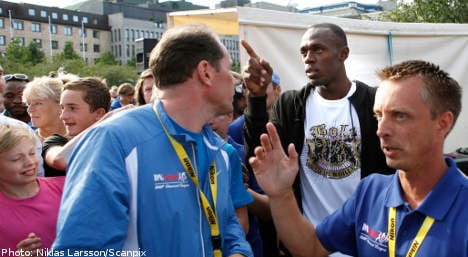 Their match-up is as welcome to the sport’s governing body the International Association of Athletics Federations (IAAF) on what has not been exactly a diamond studded season so far in its inaugural year as it is to the meet organisers.

Gatlin – Olympic champion at the distance in 2004 and crowned world champion at 100 and 200m in 2005 – is not racing here because of a policy taken by organisers that drugs cheats are not welcome.

Gatlin was exposed for the second time as a drugs taker three months after he equalled the world record held then by Powell, who has been totally eclipsed by the younger Bolt ever since he inflicted defeat on him here two years ago.

Powell, though, is raring at the chance to take on both Gay and Bolt, who have both beaten him this season.

“I love it when I am in a race with Tyson and Usain,” purred Powell, who for all his promise has only won one international 100m title in the shape of the 2006 Commonwealth Games crown.

“There is a lot more excitement when this is happening. It makes me more focussed and brings the best out of me,” he told the IAAF website.

Certainly Bolt – whose world record of 9.58sec could well come under threat – will be anxious to confirm he is still very much the number one after returning from a mid season injury and his appearance here owes a lot to the persistence of meet director Rajne Söderberg, who believes he knows another factor that persuaded the Jamaican to compete.

“I think it was the only 100m race he lost in his professional life (when he lost to Powell) so he probably wants to come back for revenge,” said Söderberg.

Söderberg is also convinced that the sell out crowd will see something extra special on Friday.

“This will increase interest in the meeting for the future and talk of the race will linger for years.”