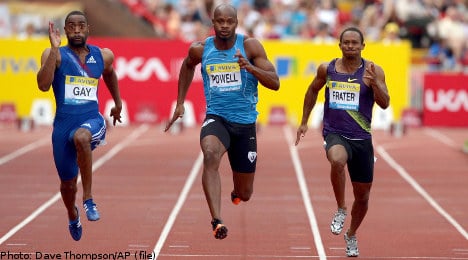 Powell was due to take part in a face off against fellow Jamaican Usain Bolt, the world and Olympic champion and world record holder, as well as American Tyson Gay in a mouthwatering 100 metres.

However a groin injury picked up during the Paris meet on July 16th, which prevented him from training for 10 days, as well as several other injury niggles, has hampered his plans to compete in Sweden.

Powell, the former 100m world record holder, said: “I’m really upset. I was looking forward to challenging Usain and Tyson and was hoping that I would be in the race with a solid chance to win.

“But with the way I’ve been feeling it would be difficult to finish the race.”

Bolt, Powell and Gay have not competed against each other since the final of the world championships in Berlin a year ago, where Bolt shaved 0.11sec off his world record of 9.69sec from the Beijing Olympics.

At the Paris leg of the Diamond League Bolt confirmed his status as the fastest man over 100m setting a time of 9.84 to beat Powell (9.91).

Stockholm is the 11th leg in the 14-event Diamond League series and Powell’s absence has left Bolt and Gay in a scintillating duel for the event’s 100m crown.