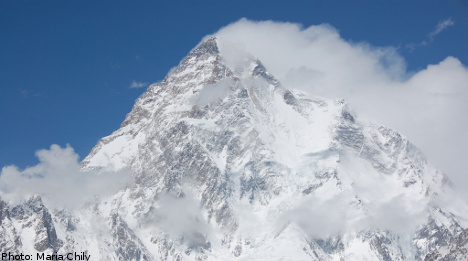 Fredrik Ericsson fell 1,000 metres to his death as bad weather closed in on the mountain, according to the Austrian news agency APA. The Swedish foreign ministry has not been able to confirm the death.

Ericsson is a well known Swedish adventurer and was climbing K2, on the Pakistan-China border and at 8,611 metres the second highest mountain on Earth, in a bid to become the first person to ski from the summit down to base camp.

The expedition was led by the Austrian climber Gerlinde Kaltenbrunner, who elected to halt an attempt on the peak on Friday after a fall, with a further two or three climbers returning to camp.

Kaltenbrunner’s husband Ralf Dujomovits gave up on the climb already on Thursday after a landslide.

One of the climbers, Christian Stangle, told the news agency that recent days have been characterised by snowfalls, avalanches and rockfalls.

“It’s snowing, the avalanches go off – and the relatively high temperatures loosen the stones from the slopes…I feel my health is more important than the summit,” he said on his homepage according to APA.

Stangle said that avalanches occurred both to the right and left of Ericsson as he fell almost all the way back to base camp III. 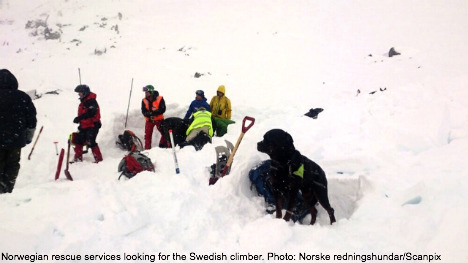 The accident in Hemsedal in central Norway occurred on Thursday morning. The man died of his injuries in the afternoon, a spokesperson for Ullevåls sjukhus in Oslo confirmed.

He was in a group of three climbers planning to scale the ice on Skohornsfjället’s south face. The avalanche that pulled him with it measured 50 by 200 metres, reported the TT news agency.

“It appears they hadn’t begun the climb yet but were still on their way up when they were hit,” Stein Tronstad at the Norwegian Climbers Association said.

Emergency services rallied after the accident and a tracking dog found the man within two hours.

He was suffering extreme hypothermia when he was flown to the Norwegian capital for treatment. The hospital announced his death at 8.30pm.

He is the second victim of an avalanche in the Hemsedal area this year. On Christmas Eve, a 40-year-old man died when he was hit while skiing off-piste.

On December 27th, another man was taken to hospital after being struck by an avalanche, also off-piste.