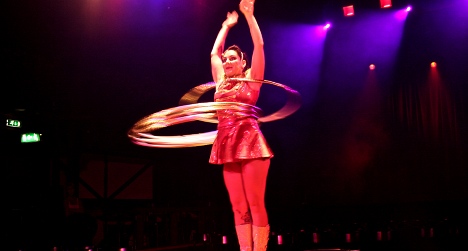 “Big hearted, funny, sexy, and dangerous” is how La Clique’s creative producer Brett Haylock describes the show’s delicious blend of cabaret, new burlesque, circus sideshow and contemporary variety. La Clique, which has been on tour for the past seven years, has delighted audiences across the world.

Now, the group is one of the highlights of Stockholm’s Culture Festival, during which they performing their first Swedish show at Tyrol on Djurgården.

When Claes Karlsson, Artistic Director of the Stockholm Culture Festival, and Anders Ålander, Senior Producer at Södra Teatern, saw La Clique perform abroad, they knew that they had to bring the self proclaimed oddballs to Stockholm to perform in Culture Festival.

Ålander recalls his first reaction to the show:

“The performance was magically wonderful and very well composed…we have to do this.” They started talking with other theatre companies across Sweden and helped to organize La Clique’s Swedish tour.

Karlsson and Ålander chose well; La Clique is the perfect show to open the Stockholm Culture Festival. Their performance is dazzling; it is a brilliant mix of raw sex appeal, humor, and unbelievable physical ability.

The acts include, but are certainly not limited to, a double-jointed man squeezing into tennis racquets, a burlesque dance with hoola hoops, and water drenched aerial acrobats. Standing alone, each act is unique, exciting, and fresh. Together, they are a true representation of physical and theatrical skill.

Captain Frodo, the show’s clumsy, charming contortionist, calls La Clique a “large extended family” where “ all the odd balls are put together in one show, a group where being different is an asset, not a flaw. We stand strong together and shine.”

The shows are being held at Tyrol, a cozy venue located in Stockholm’s amusement park Gröna Lund. A small stage is set amidst an intimate circle of chairs, where Haylock explains “there is nowhere for the artists to hide, so the audience plays a key role.”

The performers and organizers are positive the show reception will please audiences. Captain Frodo expects a “killer show” and Ålander confessed that he is “absolutely certain” that Swedish audiences will love the performance.

La Clique are performing as a part of the Stockholm Culture festival between August 10th and 15th, then returning again from September 10th to 18th. The group will also visit Lund, Halmstad, and Umea.