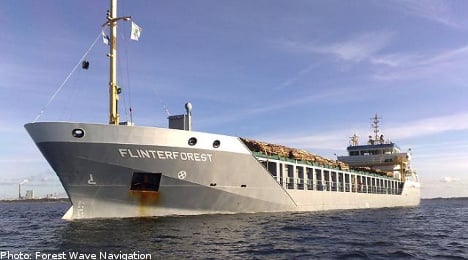 “We don’t know what has happened yet, but we are investigating the incident,” Birgitta Andersson at the Swedish coastguard said to the local Helsingborgs Dagblad daily.

The coastguard received the call that a vessel had run aground outside of Laröd on the Hittarp reef in the Öresund strait at around 5.35am on Friday, Andersson confirmed.

On closer inspection it was found that while the vessel itself remained intact the skipper of the vessel appeared to be under the influence and the police were called.

“He was taken to the police station for further tests and interrogation,” Calle Persson at Skåne police confirmed.

Forestwave Navigation said it would issue a statement regarding the matter

While the police now have responsibility for the investigation, it is being conducted by the coastguard and with the shipping inspector still trying to determine how to free the ship, which is beached on gravel.

“We don’t think we’ll be able to free it before the weekend. To get it out, we’ll have to relieve it from its cargo, and another ship will have to come free it,” Nilsson said.