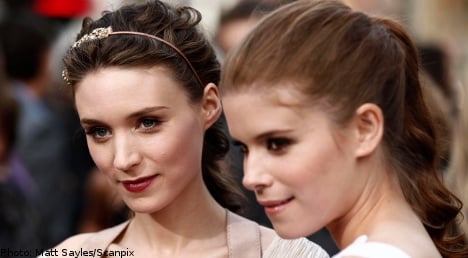 Rooney Mara, together with her sister Kate Mara

The identity of the actress to play the hacker heroine of the Swedish author’s bestselling thriller trilogy has been the topic of intense discussion during the spring as the role has been seen as one of the most coveted for many years.

The choice of Rooney Mara, who worked with Tattoo director David Fincher in The Social Network, a film about the founders of Facebook due for release in October, has surprised Hollywood watchers with almost every A list young actress connected to the role at some point.

Mara will play opposite Daniel Craig who has been given the role of investigative journalist Mikael Blomqvist. Swedish actor Stellan Skarsgård has also confirmed that he had been offered the role of the main villain, Martin Vanger.

The 25-year-old has a modest CV in comparison to the likes of Carey Mulligan, Natalie Portman, Kristen Stewart, Scarlett Johansson and Ellen Page, all of whom were hotly tipped to claim the role played by Noomi Rapace in the Swedish language original.

Aside from her role in The Social Network, Rooney has starred in the remake of A Nightmare on Elm Street, Dare and has appeared on ER. She is the sister of actress Kate Mara and oversees the charity Faces of Kibera, which provides food, clothing and medical care for orphans in a Nairobi slum.

Shooting for Tattoo is slated to begin in Stockholm in October for a December 21st, 2011 release.