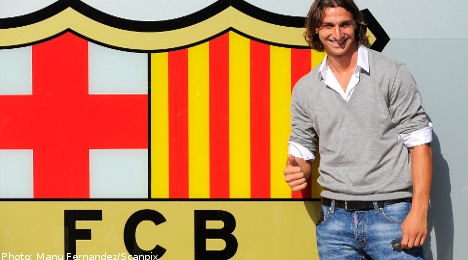 Ibrahimovic only joined Barcelona a year ago in a mega-money move that saw Samuel Eto’o and €50 million head to Inter Milan.

But following the Catalan giants’ capture of David Villa, Ibrahimovic’s place in the starting XI looks under threat, which has led to rumours of a possible transfer.

On Wednesday night Milan general manager Ariedo Braida had claimed that a transfer was possible, but Raiola dismissed such notions.

“Ibrahimovic has a four-year contract with Barcelona and will stay at Barcelona,” he told Sky Sport 24.

“It’s nice to know that a big club is interested but that’s where it begins and ends.”

The 28-year-old spent five years in Italy, initially with Juventus and then Inter, where he was a huge fan favourite.

He had mixed debut season with Barcelona and despite scoring 21 goals in 41 games he spent much of the run in towards the end of the campaign on the bench.