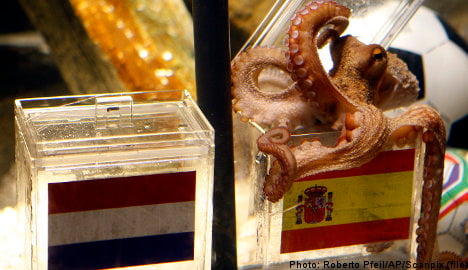 Given a choice between a red or blue plastic box representing the two coalitions in Sweden’s parliament, the Riksdag, Melvin chose the blue box – twice in a row.

Melvin’s choice was clear. There was never any doubt about his movements, the Sydsvenskan daily wrote on Friday, which added that just to be on the safe side, the octopus was given two chances to choose.

The newspaper took the initiative to test the octopus, clearly inspired by German octopus Paul, who correctly predicted the outcome of the World Cup throughout the tournament.

Melvin was born in the Mediterranean Sea and is – like the World Cup’s Paul – of the species Octopus vulgaris, or common octopus. For the test, a red and a blue plastic box were placed at the same distance away from Melvin. It soon became clear that Melvin had plumped for the centre-right corner when he wrapped most of his eight arms around the blue box.

With a month to go before the Swedish electorate goes to the polls, it remains to be seen whether betting on politics works the same way as it does for football when it comes to octopi.