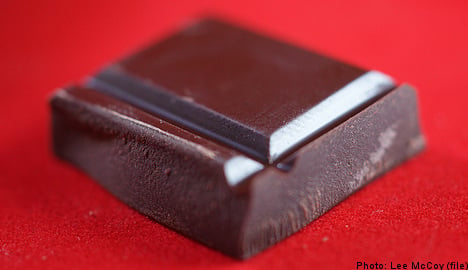 A piece of 70 percent dark chocolate

The findings were published in the Tuesday issue of Circulation: Heart Failure, an American Heart Association journal.

The nine-year study, conducted among 31,823 middle-aged and elderly Swedish women, looked at the relationship between the amount of high-quality chocolate the women ate and compared their risk for heart failure.

The quality of chocolate consumed by the women has a higher density of cocoa content comparable to dark chocolate by American standards, it was observed.

Researchers found that women who ate an average of one to two servings of the high-quality chocolate per week had a 32 percent lower risk of developing heart failure.

Those who had one to three servings per month had a 26 percent lower risk, while those who consumed at least one serving daily or more did not appear to benefit from a protective effect against heart failure.

The lack of a protective effect among women eating chocolate every day is probably due to the additional calories gained from eating chocolate instead of more nutritious foods, said Dr. Murray Mittleman, lead researcher of the study.

“But if you’re going to have a treat, dark chocolate is probably a good choice, as long as it’s in moderation,” he added.

High concentration of compounds called “flavonoids” in chocolate may lower blood pressure, among other benefits, according to mostly short-term studies. This is the first study to show long-term outcomes related specifically to heart failure.