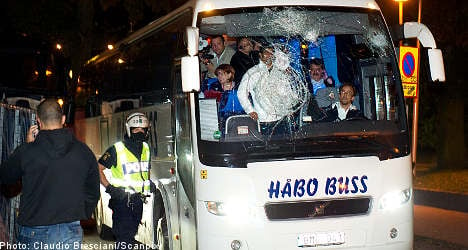 Delegates from European football’s governing body, Uefa, were among the targets as an estimated 300 AIK fans went on the rampage after the sides played out a scoreless draw at Råsunda stadium.

Uefa has officially charged the Stockholm club with “lack of order and security” and will meet to discuss disciplinary measures on September 23rd.

Photos taken outside the arena show how the front windscreen of the Bulgarians’ team bus was smashed with rocks, while Levski officials and players were struck by stones and bottles.

Levski’s president, Todor Batkov, was outraged by the scenes after himself being hit by a bottle.

“It’s shocking. Sweden is a civilised country and such scenes are completely inadmissible,” he told The Guardian.

“I’ve been to so many countries and I’ve never seen such things.”

The Solna-based club issued a strong condemnation of Thursday’s events through a statement on its website.

“We note with sorrow and despair how a small few once again take the liberty of ruining things for all real AIK fans. We will do everything in our power to ensure that these saboteurs receive their rightful punishment.”

AIK was fined €15,000 by Uefa after crowd violence at a Champions League qualifier against Norwegian team Rosenborg on July 28th.

Earlier this week, AIK defender Walid Atta had his car vandalised after refusing to sign a new contract for the club. The player said he had previously received threatening phone calls from irate supporters.

Khennet Tallinge, chairman of the Swedish Football Association’s disciplinary committee, has urged politicians to intervene and help stamp out a problem that continues to blight the sport in Sweden.

“Look at England. There they have much tougher legislation,” he told Stockholm daily Svenska Dagbladet.

“We do have a law allowing barring orders in Sweden but it’s much harsher in England. Risk supporters there have to report to a police station 100 kilometres from the match while it is being played.”