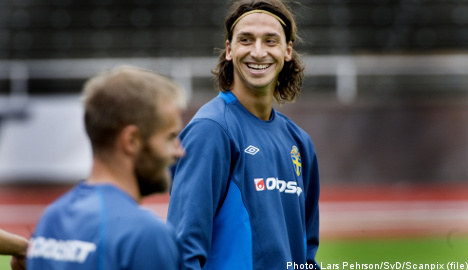 “Ibra is very happy about the interest from Milan and other teams but Barcelona won’t sell him, (coach Pep) Guardiola doesn’t want to sell him,

hence I think such a deal is impossible,” said Raiola. “Barcelona don’t want him to leave and 99.9 percent sure he will stay in Spain.”

However, speculation grew about Ibrahimovic’s future when Guardiola left him on the bench for the Spanish Supercup, picking new signing David Villa instead. However, Raiola said nothing should be read into that.

“In a big club no-one has a guaranteed place, Zlatan is used to fighting, but newspapers want to make a mountain out of a molehill. “He wants to stay and fight, Guardiola doesn’t want to sell him and he’s the boss.”

Galliani had earlier insisted the seven-time European champions were interested in bringing the 28-year-old back to Italy.

“We will try, even if it’s difficult,” he said.

However, Galliani claimed he has faith in the team even if there are no new additions.

“I don’t want to talk about technical or tactical aspects, the team seems in good shape, we’ll see at the start of the championship, I’m quite optimistic,” he added.