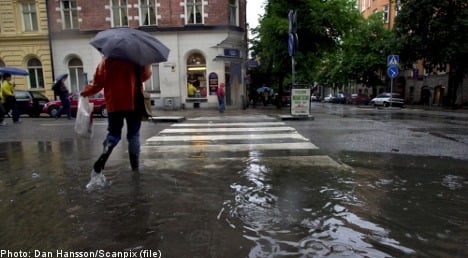 But despite the onset of rain and cooler temperatures, Rehn argued that summer was not necessarily over for the time being.

“No not yet. When the average temperatures fall under 10 degrees Celsius, then summer is officially over, according to the definition.

The heavy rains will on Tuesday have advanced up to Svealand and southern Norrland. Västra and southern Götaland will, according to the forecast, experience high winds, with storms possible off the southern Bohuslän coast. The areas around Lake Vänern could get 40 millimetres of rain during Tuesday, according to SMHI.

A class one (of four in a climbing scale) has been issued for gales from the Skagerrak – a straight running between Norway and the southern coast of Sweden – to the southern Baltic Sea.