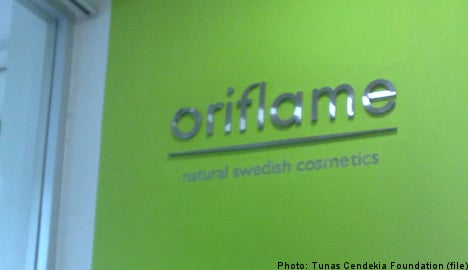 At the same time, ministry officials raised the case of Sakineh Mohammadi-Ashtiani, a 43-year-old mother of two sentenced to death by stoning by an Iranian court, when it called in ambassador Rasoul Eslami on Tuesday, Julin told AFP.

question of Sakineh, the woman threatened with stoning,” she said.

One of those detained in the Oriflame arrests, which were alleged conducted amid reported allegations in Iran, is a dual Swedish-Iranian national, Julin said.

She said the matter was being dealt with by Sweden’s ambassador in Tehran, who “is in contact with the Iranian foreign ministry and other authorities.”

Oriflame, a direct sales company, said on Monday it had received no explanations from Iranian authorities about the closure and arrests, but believed they may be linked to its business model.

“Our business model is to sell cosmetics and give 40,000 Iranians, mainly women, a possibility to earn money through direct sales,” the company’s chief financial officer Gabriel Bennet told AFP, adding any reference to a pyramid scheme was “ridiculous.”

“These companies operate with outside support and are not engaged in economic activities. They are under the guidance of spy agencies,” he said.

Oriflame did not immediately respond to requests for comments on the

The case of Sakineh Mohammadi-Ashtiani, sentenced to death by stoning by an Iranian court, has been criticised by Western nations and human rights groups amid warnings that her execution is imminent.

Iranian officials maintain she was handed the stoning sentence for adultery and for being an accomplice in her husband’s murder.